The purpose of this site is to educate individuals about random access memory, its current market outlook, and its major influencers. Almost everyone has heard of random access memory, but not nearly enough know what RAM does for those of us that use computers in our everyday lives. Random Access Memory, or RAM, is is a data storage system that stores the data that is being used by you at this very moment. The rate at which it can access memory and keep computers running smoothly has made it a very lucrative market. There are graphs below that depict the what the RAM market has looked like over the last decade.

The graph above shows the DRAM market growth dating back to 1993 and a projection of what the market could do in the coming years. The market has fluctuated throughout the recording of this graph. Recently the market just finished enjoying some of the highest growth it has seen since the growth experienced when DRAM first came into production. 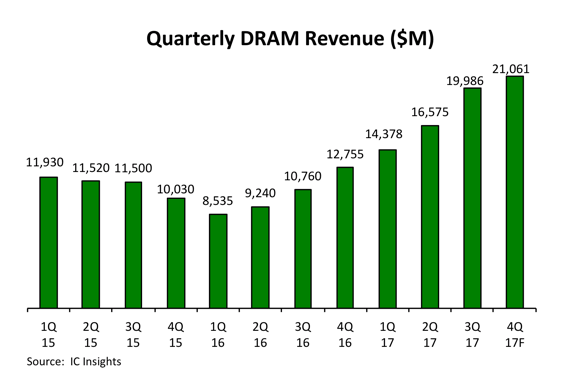 Pictured above is a graph that shows the dynamic random access memory revenue from the first quarter of 2015 until the fourth quarter of 2017. Though it proves to be relatively steady throughout 2015, starting with the second quarter of 2016 there has been increased revenue each quarter. This shows that the market has been consistently improving over the last few years.

I have included an image of a RAM chip so there is proper visualization throughout the viewing of this site.